Write a review Read 1 review for Pacific Centre CFShops and write your own comment!

Please note, operating hours might temporarily vary due to the new COVID-19 coronavirus.

Have you visited Pacific Centre CFShops? Write a review 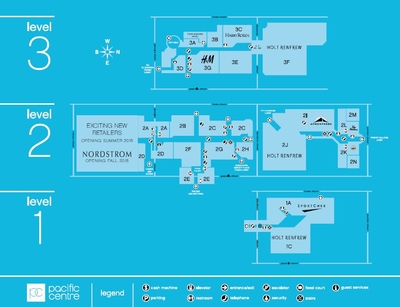 Look at the list of stores in Pacific Centre CFShops, hours, location and information about mall and special events, sales, coupons. You can choose store from list below and get detail information - other stores locations for the brand, location, shopping hours, phone, map, directions contact. Pacific Centre CFShops is one of the best shopping place for spend your free time - mall/shopping center has all types of stores - outlets, department, fashion, traditional and more.

Have you ever visited Pacific Centre CFShops? Do not forget to write shopping review and rate your satisfaction.

Pacific Centre is the largest fully enclosed shopping mall in the heart of downtown Vancouver, British Columbia, Canada. The mall is located adjacent to the Vancouver Art Gallery. Pacific Centre Mall's main entrance is at 700 W Georgia Street and a new entrance at Robson and Granville Street since expansion in 2015. The centre is owned and managed by Cadillac Fairview Corporation.

Pacific Centre was opened in 1971 and since then has been expanded several times. There has been more than $60 million invested towards renovations and redevelopment of the property in the last years. In 2015 after 3 years of renovation, the Pacific Centre expansion on Granville Street welcomed new tenants including high-end department store Nordstrom, AllSaints, Abercrombie & Fitch, Hugo BOSS, Kate Spade, Weekend Max Mara, PANDORA, Ted Baker London, B2, Tumi, Disney Store, Microsoft Store, Rockport Shoes.

Inside the Pacific Centre visitors will find over 100 shops and services including Aritzia, H&M, La Senza, J Crew, Harry Rosen, Michael Kors, Holt Renfrew – Canada’s largest luxury department store housing designers such as Prada, Chanel, Alexander McQueen, Dolce & Gabbana, and more. Holt Renfrew, which is housed in Pacific Centre’s north end, is expanding its flagship from 140,000 square feet to approximately 180,000 square feet. The expansion is set to be completed by the end of 2016. The mall is directly connected to Hudson's Bay department store. There are also plenty of techy shops in the mall including Apple Store, Sony and branches for Fido, Rogers, and TELUS. There’s an eclectic food court offering Insalata, Flaming Wok, A&W,New York Fries and Tim Hortons  just to name few. The centre is home to restaurants Bistro Verde, Ebar and Habitant. Visitors can also choose to dine in style at the Four Season’s award-winning Yew Restaurant + Bar adjacent to the Pacific Centre.

Have you visited Pacific Centre CFShops? Write a review
Go to stores list

The overall mall is very good, with a wide variety of food and stores, you will get everything on your shopping list. There's even stuff for the kid(s) in the family! The one thing about the mall I dislike are the prices... but in the end you end up going home with what you wanted!

Give us your experience with Pacific Centre CFShops by writing a short review.